What is anticipation in sports?

Athletes playing fast-paced racket sports such as badminton and tennis are constantly under immense time pressure to respond to the events in the game. In these circumstances, the ability to correctly predict what happens next is crucial for successful performance. This ability is called as anticipation, also known as ‘reading the game’. Very often, accurate anticipation and response is the skill that sets apart the top players from their lesser counterparts. Anticipation is often confused with guesswork. While guesswork is randomly picking one from all available options, anticipation is guided by multiple sources of information available to the player. In guesswork, the chance of getting it wrong would be very high, but elite players in most sports are seen to respond highly accurately to most situations in the game, thus supporting the idea that their actions are not random and guided by some underlying mechanism.

Anticipation can be conscious, unconscious and a combination of the two. When asked to explain a particular movement on court, it is common for elite players to be unable to explain the reason for it in words. However, this does not mean that they are not attuned to the sources of information that determine what happens. It just means that they are not conscious of it.

Anticipation is constantly on display in badminton, in both singles and doubles. Often, by accurate anticipation, players are already in position to hit a particular stroke, sometimes even before the opponent has made contact! Recent examples of players who are extremely skilled at anticipation include Viktor Axelsen, Hendra Setiawan,  Huang Yaqiong etc.

So, how do players anticipate? Skilled anticipation is broadly based on two things. Let’s understand each one through examples –

1.      The ability to use postural information

Players who understand the relation between technique and the subsequent direction, speed, spin and trajectory of shuttle that it causes, can start preparing a response as soon as the relevant information is available.

For example, to play a cross court slice from forehand rear court, a right handed player is mostly positioned to the left of the shuttle, the backswing starts from the side of the shuttle and the racket moves from right to left in a ‘cutting’ motion on top of the shuttle. The face of the racket is closed as it nears contact and the follow-through is towards the cross court (Figure 1) 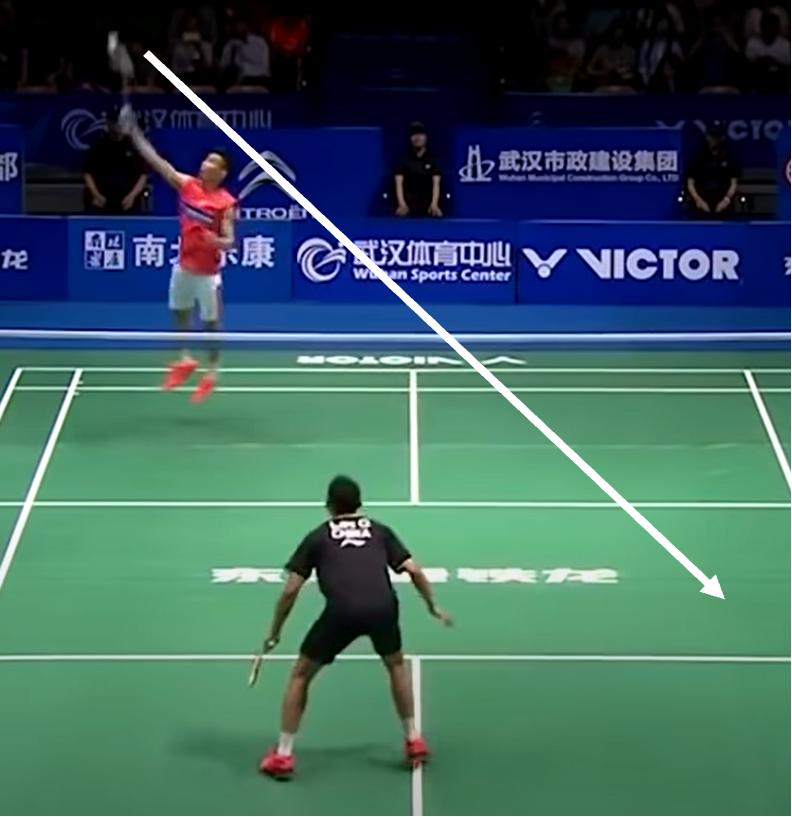 2.     The ability of gauging the probabilities of events

Assigning probabilities to unfolding events can be done using a combination of technical -tactical knowledge and awareness.

For example, on a high lift to the forehand rear court, your opponent has the option to play fast slice, a straight/cross smash, a normal or punch clear etc. and hence the probability of any of those happening is not skewed towards one particular shot. Of course, based on the match situation, the opponent’s preferences and their evolving action, you can narrow down on the shot that they will eventually choose, but that doesn’t take away the fact that they had a lot of options to begin with.

On the other hand, if you’ve managed to play a deceptive flat push to the forehand rear court and the opponent is chasing behind the shuttle, the options that he/she has are very limited, thus making it easier to predict what would happen next. (Figure 2).

Assigning probability to different occurrences is based not only on utilizing the present tactical information but also taking into account other information like what the opponent did the last time they were in this situation, percentage data from performance analysts, factoring in the match situation, weather conditions, opponent's mentality (aggressive or defensive) etc. While it is not possible to consciously process all this data within the severe time constraints in badminton, we should not discount the role that all these multiple factors play in predicting future occurrences.

So how do you learn to anticipate? Simplest way is to play more and more games against similar as well as newer opponents. However, this is a very time-consuming and rigorous process. So, is there a more efficient way? Stay tuned to Badmintoo.com to find out!